Mahatma Gandhi the father of Indian Nation usually saying in most of his congregation that “Sanitation is more important than Independence”. He said every human has right to avail safe drinking water and having toilet which leads to a dignified quality of life. Not only Mahatma but in Ancient age during Gupta dynasty & under Chandragupta Maurya, Chanakya the then economist also suggested many of the time to Chandragupta Maurya to provide better sanitation facilities for the subject. So it is a long time demand of many icons.

But in the recent era many civil societies are interested & emphasized on visible work which may welcome the donor Agencies towards them. They are running behind the Agro Horticulture, Horticulture plantation, vegetable cultivation & construction work like DBI which is no doubt the sign of physical growth of the society. It is most important for a person growth but at the same time we shouldn’t ignore the value of equality & dignity of a person. It is Harsha Trust & a few no’s of organization who are interested to work for the dignity & equality of the civilization. Sanitation & drinking water supply is one of the most innovative and acceptable work started by Harsha Trust in 2014 which addressed the dignity and equality in a large extent.

Darukona a small hamlet 13 km away from block head quarter consists of 10 households of Schedule Tribe caste of Ghospadi village under Kankubadi Gram Panchayat. The villagers were suffering from many health hazards due to lack of safe drinking water. Most of the times the women were engaged in carrying water from spring for cooking and drinking purposes which is 500 meters away from village. The only one tube well is not much enough to fulfill the needs of the people, animals & children. In 2013 Harsha Trust completed Diversion Based Irrigation Project under the support from Jamsetji Tata Trust which was only mitigating the livelihoods aspect. But people are still waiting for further facilities like sanitation and drinking water supply.

In 2014 the villagers and Sale Kadraka on behalf of the Maa Thakurani SHG told to Pankaj Kumar Mahakud the Harsha Trust professional regarding the problem faced by them due to lack of safe water. So one day was fixed for meeting and to share the concept of the Toilet & bathing room and drinking water supply. Sarat kumar Sahoo Team Leader of Harsha Trust shared the concept of construction of TBR and water supply. He said if all the household will involved in the work then we can start the work. For the work every household will contribute unskilled labour. Every household have to contribute Rs-1000/- as corpus fund and after the completion of the work people would pay Rs-10/-month as maintenance fees. So villagers were taken some time to rethink the option and after a series of individual interaction by Pankaj Kumar Mahakud, SHG members are ready to start the work. To know the work and model of TBR one exposure was organized for Th.Rampur, Gram Vikas field. People from different SHG, UVS and village committee members had gone for exposure and visited three villages where people have contributed sand, stone, chips, unskilled labour to complete the TBR work. The villagers of Darukana & Baradaguda influenced by seeing the TBR & back yard kitchen garden. They used the waste water of bath room for kitchen garden purposes. 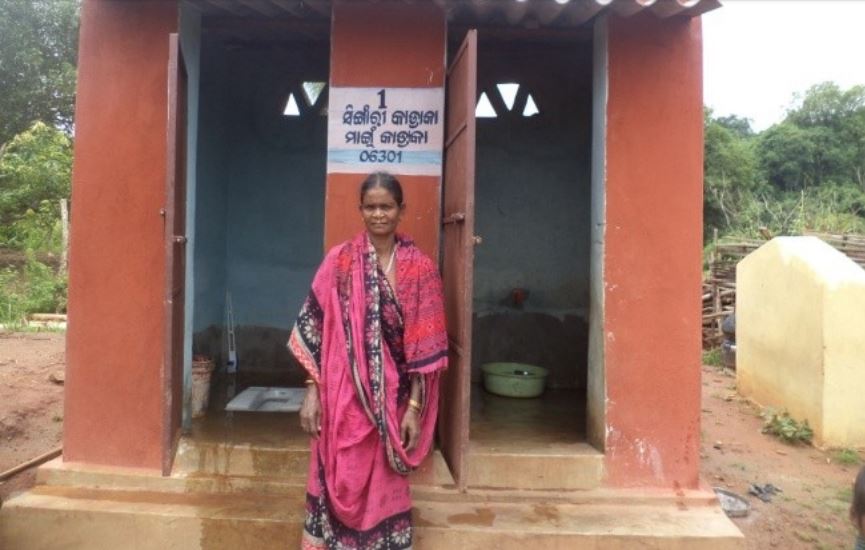 After a series of discussion, villagers were started bricks making in the month of May last, 2014 but it was too late as monsoon whitewash the half burned bricks. People started foundation digging and collected stone & work started in the last week of May, 2014. All the 10 HHs started work and foundation work completed within a week of time but in the mean time shortage of mason increases our headache so Harsha Trust staff explored the mason from Th.Rampur, Kalahandi. Before rain 8 HHS bricks work completed and again from the month of December, 2014 incomplete work started & within 3 months all 10 HHs TBR construction work completed. To complete the work Swachha Bharat Mission contributed Rs-12000/- to 10 households, Harsha Trust contributed Rs-6000/- & community contributed Rs-4000/- as unskilled labour, materials cost etc. 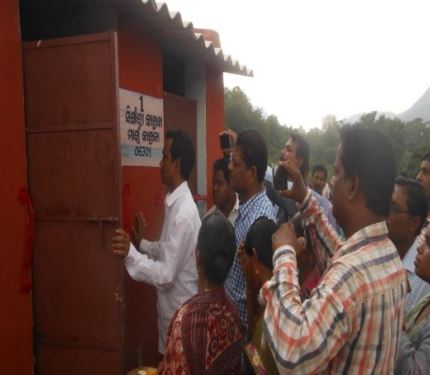 For drinking water supply villagers engaged themselves for digging the pipeline & construction of water tank work and from every family 2 members contributed labour for the said work which was 150 mandays. For the water tank work Harsha Trust contributed Rs-6000/-, from JTT Rs-65130/- & community contributed Rs-22500/- as unskilled labour and materials like stone cost .After the completion of the work the villagers with Harsha Trust staff arranged one inauguration meeting & on 3 rd July, 2015, MLA Mr. Jagannath Saraka, BDO Mr. Balaram Patra, BJD District President Mr. Sudhir Das & Sarapanch of the concerned G.P participated the function. It was declared as the block first open defecation village, which open the eyes of the block administration to replicate the same model in to another area. In the meeting BDO & MLA requested Harsha Trust to expand its work to other villages.

The villagers who never dreamed even their life time water will come to their feet & they will bath & fetch the water like urban people. Somehow their dream became success due to the continuous effort of “Maa Thakurani SHG” members of the village and Salema was the hauker of the credit. Again the SHG proves that continuous labour & hard work never go on vain & not only educated & urban women can dream but we can dream & make success.