Solar Lights in the Poultry Farms:

Poultry farming is a very quick return livelihood intervention for rural tribal families. Harsha Trust is working on poultry farms with several agencies including the Government of Odisha. The tribal families with whom we have initiated poultry farms are below the poverty line (BPL), challenged in their livelihood and food security throughout the year. Several families are forced into distress migration, as they are landless, asset less and are also unable to access the state provided entitlements. 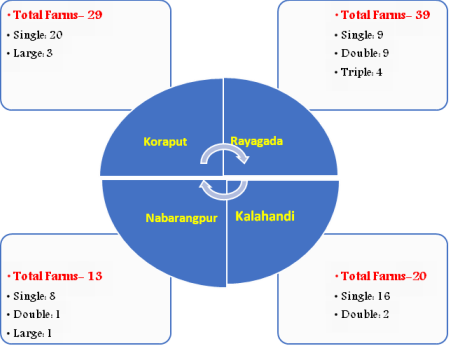 But among the rearing practices, there is a principal obstacle of clear/bright light in the night which is important for the chicks. What prevents poultry farmers from providing bright light?

Thus Harsha Trust with the support of SELCO Foundation, initiated a survey and covered 101 poultry farms under the solar lightning programme in our four operational districts i.e. Koraput, Nabarangpur, Rayagada and Kalahandi; this was beyond the targeted 100 nos. during the FY 2019-20 with the package standardized by SELCO for the same.

Outcome of the Project:

1. Availability of light during night hours, starting from 5:30 PM to 6:30 AM and cost cutting which would have been spent to purchase Kerosene/ firewood/ coal/ candles for lighting purposes.

2. A total of146 farmers were directly benefited leading to one more cycle of rearing in a year collectively, as the rearing period reduced and it was also more profitable.

3. A total of 101 farms with a capacity of 44,300 chicks in a single batch, benefited out of this as a result of the one year engagement.

4. Chicks’ intake improved during the night hour; as a result, the FCR rate increased and the rearing period decreased.

5. Care takers of farms were able to visit their farms frequently in the night hours without any fear.

6. Chicks are not congregating at one place due to the clear light in the farms; as a result, the mortality is minimized.

7. There is no hazard from fire or electric short circuits.