Nurseries at a Commercial Scale – Producer Groups Make a Breakthrough

Availability of quality planting material is highly essential for successful commercial vegetable cultivation. Usually small farmers make small nurseries in their homesteads for personal usage. The farmer maintains and manages the nursery till the seedlings are transferred to the field. However in this period any pest and disease incidences, natural calamities, increases the seedling mortality in the nursery as well as the main field which make it extremely difficult for the farmer to recover or have sufficient time to raise a new nursery for the season.
Thus the concept of community nursery seed beds was thought up and farmer groups were encouraged to develop commercial nursery beds for the community as a whole. Producer Groups (PG) were provided with poly-houses/ net-houses for raising community nursery beds and produce quality planting material on a commercial basis under protected conditions. They were provided with the structure, with accessories and initial consumables, and were trained on advanced nursery management technologies like soil solarisation, sowing, fertilisation, germination, fertilizer application, raised beds, pest and disease management activities, etc.

Objectives of this Activity

Rationale of Commercial Nurseries : Various aspects of nursery production and management have not received proper attention in the past. Therefore, many diseases have spread to virgin areas bringing about economic losses in most of the vegetable growing areas of Southern Odisha. They cause loss of vigor and poor quality of vegetable seedlings. Non availability of quality planting material is one of the major constraints in obtaining optimum quality and productivity in vegetables. Thus nursery raising under shade-net ensures quality seedling. Proper knowledge in management of nursery for the production of good quality seedlings is the most essential component for the establishment and development of good vegetable fields and crops. It germinates and grows well in warm and humid climates 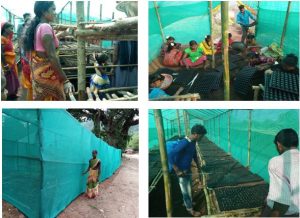 Approach & Methodology: In two villages of Kalyansinghpur block of Rayagada district, the Producer Groups Maa Ganga -Jamuna & Salori initiated a commercial nursery for vegetable crops of tomato, brinjal, chilli, cabbage, cauliflowers, and fruit crops like papaya. They were trained and facilitated by the project personnel on preparation and maintenance of the nursery on a regular basis. These groups cater to the needs of quality planting material for villages in the locality. They earned an additional income of Rs 15,700/- through the nursery. With increasing income every season, the nursery has become a sustainable venture today.
Selection of the beneficiaries was made on the basis of the interest of the farmers and the SHGs. Producer Group functionaries convinced the farmers on the benefits of a community nursery. Harsha Trust supported by Axis Bank Foundation provided all the necessary inputs after meticulous hands on training on the production technology of hybrid seedling production.