A profitable farm in the forest for Wendi Hicoca. 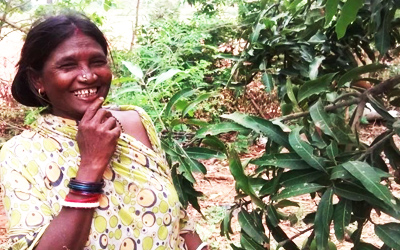 Wendi Hicoca is from Dakulguda village of Rayagada district. Five years back under the Forest Rights Act (FRA) Wendi got 1.5 acres of land. The land is located on the edge of a hill called Hiradangar in the village of Dakulguda. The land was sloping and of poor quality. Having got the plot Wendi and her husband Lada Hicoca started cultivating Ragi (Kosla) for the initial soil rejuvenation and managed to get a good crop. Wendi always strived to get more from the plot as she had five mouths to feed. Wendi used to say “my family had to work round the year in other people’s land to earn their livelihood; but getting fair wages for even 100 days was a challenge.
Harsha Trust decided to support Wendi through its NABARD support WADI program. She started with a cashew plantation. It took 4 years for the cashew to bear fruits, and in the meanwhile she was introduced to inter – cropping of vegetables. The vegetables she and her family adopted were brinjal and tomato and cereals (ragi and maize). 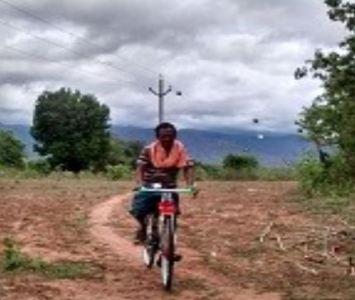 They fenced the land with a strong stone wall boundary of about 90 meters length to protect it from grazing cattle. This ensured that atleast the family platters were full and there was no more hunger.
To facilitate the irrigation infrastructure Harsha Trust dug a bore well in their field to irrigate the standing crops. The bore well has further increased yield and Wendi is now making a profit after all costs and self consumption of Rs 15,000 to Rs 20,000. From 2015 the orchard crops started giving returns and Lada and Wendi got Rs 4000 from mango and Rs 9000 from Cashew.
With the increased income Wendi decided to renovate their house. Lada also purchased a bicycle, a mobile phone and a table fan. It’s not only the asset base of the family that has increased; but also the concomitant social status in the village.
« Back
Copyright © https://harshatrust.org 2018, All rights reserved
Powered By SPIS