It is widely accepted that “Small is beautiful & precious”. It has experienced by a tribal women Wendi Pidikaka of Pinda Village. Her family belongs to ST category & having 4 acres of land & mainly depended upon agriculture. She had two daughters, only son & spouse. Could you believe a tribal woman insured her life? Though it seems impossible but it is absolutely true. Harsha Trust for the first time in Bissamcuttack project started social security scheme in 2013 called LIC P&GS (Gosthi Bima O pension). Harsha Trust is also the Nodal Agency for the group insurance policy.

One workshop was organized at Harsha Trust, Bissamcuttack premises in the month of July, 2013 Mr. Bibhu Kalyan Dash from LIC; BBSR was nicely described about the norms and benefit of the policy. All the CSP and professional were participated in the workshop. After that during the field visit of Pinda village Harsha Trust CSP Nityananda mobilized people to insure their lives. He also conducted SHG meeting & shared the norms and benefit of the scheme. If the policy holder will be died his/her nominee would get Rs-10000/- from LIC of India, BBSR branch through Harsha Trust.

In the month of 28.09.2013 their lives insured. Unfortunately in the month of 26.06.14 Wendi Pidikaka expired due to suffering from malaria & joint pain (Ganthi Bata) though his son Mansing Pidikaka admitted his mother to Government Medical of Bissamcuttack & she died in her residence after 15 days. After her death her son handover the death certificate to Harsha Trust and Harsha Trust after verification submitted to LIC office at BBSR. Finally after 1 month Mansing pidikaka received RS10,000/- in a meeting at his village Pinda. In the meeting from different villages 150 women’s participated, from Harsha Trust Sarat Kumar Sahoo shared the objective & benefits of the scheme. 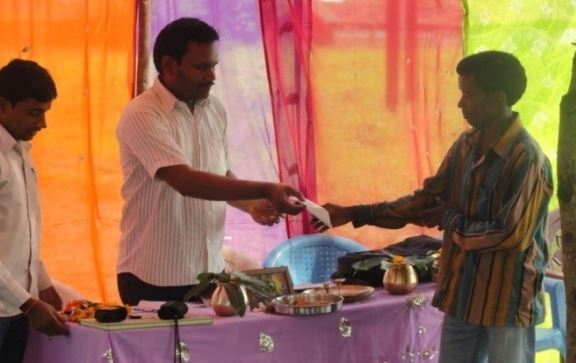 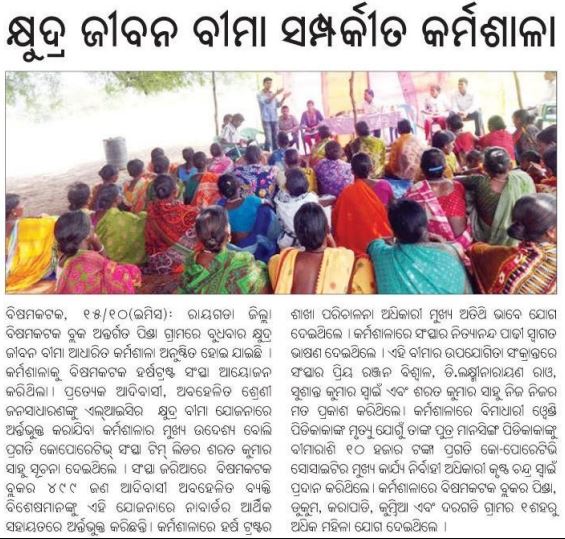 As a result of her death her family got benefits & utilized Rs5000/- in the funeral rites & kept Rs5000/-in the bank. By looking the benefits 42 villagers of that village insured their lives during the current financial year. Sembu Urlaka of Pinda village said “it is a very profitable scheme & like a blessing to us”. Mansing himself said “I had no faith that insurance amount will be reached me within a month. I would like to give my sincere thanks to Harsha Trust & LIC that they are doing a marvelous work”. Sadan Kumbruka of the same village said “It is very astonished that in Bissamcuttack town at least 2% people may access LIC but in our village almost all household got their lives insure & in such a remote bucket Harsha trust reached to us”. Sanamajhi Pidikaka also said “Harsha Trust is with us during our lives through promoting livelihoods activities and after the lives by facilitating LIC Micro Insurance”.