Date: – 20.01.15
The right kind of information can change lives. It changed the meaning of Kaibati Jadia’s existence. Kaibati of Digiribandha village.of the Kalahandi district had a cleft lip, which was a cause of much shame for her and her family.
In September 2014 with support from Gram Vikas, Bafla project 15 farmers came on an exposure visit to Harsha Trust, Bissamcuttack project. The main objective of the exposure was to see the WADI and vegetable intercropping interventions. During the field visit the team visited (Mango & Cashew) fields, inter cropping in WADI fields, vegetable cultivation through trellis and vegetable cultivation through drip irrigation systems. In the evening a farmer’s interaction session was organized at the Harsha Trust Training hall premises, where Kaibati’s father saw pictures of cleft lip patients. Dhanapati Jadia father of Kaibati was one of the landless farmers of the village under Gopinathpur Panchayat of Thuamul Rampur block of Kalahandi district, and a part of the exposure team. 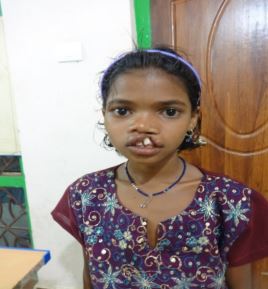 Dhanapati came to know that Harsha Trust also facilitates the surgical operation for cleft lip patients on seeing some of the photographs stapled in the photo gallery in the training hall. He was interested to know more as his daughter was suffering from that congenital deformity. Through a series of engagements eventually a day was fixed for the surgical operation at Jharsuguda TRLK hospital.

Now his daughter feels very confident about herself as she can smile again without worrying about appearances. Those who teased her at school and during social functions feel guilty of their actions. Series of visitors including neighbors and distant relatives now come to see her face and appreciate the initiative taken by Harsha Trust. 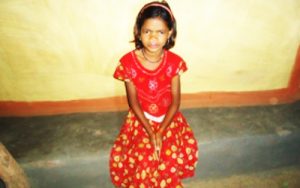 She emotionally stated that, “Harsha Trust and Gram Vikas gifted me a new life and I will never forget their contribution to me and my family” as she saw everyone around her appreciating her smile. Now her father and mother, Sunamani Jadia, express their gratitude because they can marry their daughter to anybody without fear, hesitation or shame. Today Dhanapati Jadia is a crusader on the cause of people with cleft lips. He wants to help those who have similar congenital conditions in their lives causing shame and loss of confidence.