The efficiency of marketing of vegetables in Odisha especially in the tribal belts has been a significant concern always. Here the farmers typically depend heavily on the middlemen particularly with vegetables as they are quickly perishable and with no storage facilities, options are limited. The producers and consumers often get poor returns and the middlemen control the market. In these days of commercial agriculture, it will be more appropriate to say, “a good farmer has his hands not just on the plough but also on the market”. An efficient marketing system is an important means of raising the income level of farmers and the satisfaction levels of the consumer.
In the year 2004, late Drinju Jakesika at the age of 58 was offered a duty to serve water on the road side (NH-26) of Khuntabadi village during the summer season. Drinju was an inhabitant of Khuntabadi in the Patraguda Gram Panchayat which was about 10 km from the Block head Quarters Muniguda. Age made it difficult for him to do hard physical labour, so the Sarapanch Indra Jakesika handed the responsibility to provide water in summers on the road side to Drinju. He was happy with his new assignment.
Drinju started the work with sincerity but after a few days he found his assignment too monotonous. He searched for solutions. While serving water he found some ripe mangoes falling off the trees and it suddenly struck him that he could trade with mangoes as a vocation. He soon developed a clientele for the local mangoes. Emulating Drinju some other old women and children also started selling mangoes. Drinju died in 2005 but the market which he created continued. Slowly more women started business in the location and the numbers of seasonal items being sold increased. Mushrooms, Edible seeds and Green leaves, Nuts, Berries, and Bamboo were added to the repertoire, 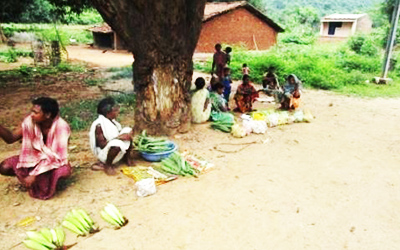 In 2010 yet another milestone was added to the impromptu road side marketing hub; vegetables were the new entrants;brinjal, tomato, ridge gourd, bitter gourd etc., added flavour to the market in the kharif and post kharif seasons till the month of December. This continued till 2013. In 2014 Harsha Trust started work in the village of Khuntabadi. People started producing high yielding varieties of vegetables like cabbages, cauliflowers, pointed gourd etc. The advanced agricultural practices like soil testing, seed testing, appropriate time of sowing, timely irrigation, proper time of harvesting, etc. adopted by the farmers due to regular training and engagement with Harsha Trust led to vegetables being grown throughout the year, plentifully. And the little mango market turned into a full scale vegetable hub.
In 2016 Harsha Trust initiated value addition in the marketing system. Instead of selling vegetables as shares/bundles, they were introduced to weighing. The women farmers of the village then formed a Vegetable Producers Group and named it Brundabati. A formal market was inaugurated in the location with support from Axis Bank Foundation.
Following them the villagers of Kebedatola & Hatipadar initiated road side market hubs. Khuntabadi has become a vegetable hub. The producer group has planned to build a shade on the road side and will serve water all the year around in memory of the founder Drinju.